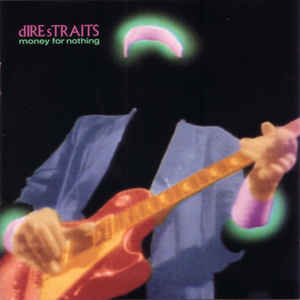 The number 1 song for the week ending Sept 28, 1985 was Money for Nothing by Dire Straits.

There has been controversy over the song’s lyrics:

The controversial “…verse appears on Brothers in Arms but is omitted from Dire Straits’ greatest hits album Sultans of Swing due to the use of the word “faggot”.” See: genius.com/2384193. Many radio stations now only play the edited version. Occasionally, the unedited gets played but rarely. When Dire Strait’s play live, I believe they play an edited version as well.

Some lyric sites have removed the controversial lyrics of the song, in order to appeal to the “politically correct” environment of today’s culture that abhors true history and wants it erased. See: www.lyrics.com/lyric/722580/Dire+Straits/Money+for+Nothing

Imagine if only we could remove all offensive “art”… what a wonderful world this would be. And dull. Sadly there is much “offensive” art that gets a pass by the SJWs (social justice warriors) of the world because they are not sincere in their efforts to remove that which is truly “offensive”. Consider some rap music and its lyrical content! SJWs operate a totally one-sided charade to marginalize those of us with traditional views of how a society will survive and thrive. “Being offended” is subjective. What offends me, may not offend you and vice-versa. How are we to navigate those waters? Remove everything? Or … dare I say, accept that we are different and choose to focus on commonalities.

Obviously there are truly offensive things in this world. Words or song lyrics should not be one of them. But peoples actions… their behaviors toward others is where we should focus on what is “offensive”. Behaviors… not beliefs. If a behavior marginalizes another, there is an action that can be punished. But for people to think or write about their beliefs is not harmful to anyone. Even if you read something you disagree with, you choose how you respond/react. The words on a page do not harm you. Can those words be influential? Sure… but let the market decide. If there is a song with lyrics you abhor, write and produce a song with your own beliefs and values to counter the ugliness. Or simply support artists with your values. Eventually, our world will reconcile and love will win. We know the end of the story anyway. God wins.

So, enjoy the music as it was intended… and learn from it. I’m not saying it was right, or good that they used those words. But in the culture at the time, it was acceptable. We should not erase history. We should learn from it.