Who was right in Charlottesville? 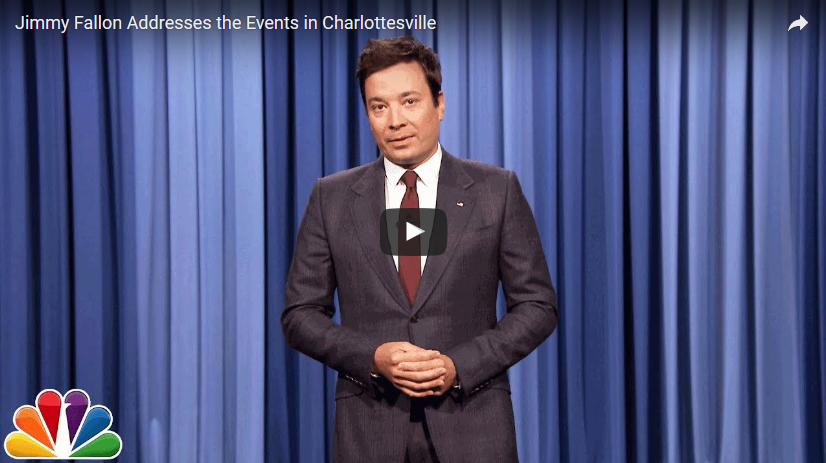 I certainly do not agree with the white nationalist’s rally. But there are facts that need to be reviewed before judgement is made. One fact is that the white nationalists got a permit to hold the rally. They were there within their legal rights. The other groups did not get a permit. When one group has permission to gather a large group, and another large group tries to protest and unlawfully revoke that permission, then there will be trouble. The protest group, who congregated illegally, provoked and possibly started the violence. Why didn’t Fallon take a stand against their hatred and violence? Everyone is quick to call the white nationalists racists and bigots, and that may be true about them. However those who hate them are pots calling the kettle black (sorry for THAT analogy). Basically, Antifa are also racists and bigots.

Definition of bigot: a person who is obstinately or intolerantly devoted to his or her own opinions and prejudices; especially : one who regards or treats the members of a group (such as a racial or ethnic group) with hatred and intolerance – Mirriam-Webster’s Dictionary

The people in the rally, simply wanted their opinion known about a “controversial” statue that was going to be removed. They were holding a peaceful rally, until the protesters arrived. Those who protested the rally also have an ideology of hatred, and showed it by provoking violence. Those who came to protest the rally WANTED violence, WANTED to fight (Maybe not all… but many if not most) How do two wrongs make a right?

As for the young woman who died, I feel sorry for her family, and do send them our prayers. At some point adults have to be held accountable for their own actions when they put themselves in harms way. Is it right that she died? No. But it is a fact that when you go to these rallies and protests, there may be violence… why put yourself there if you are not prepared to have a physical altercation, maybe get injured and possibly get killed… protesting for your cause?

Despite the fact that I disagree with the white nationalist’s sociopolitical beliefs, they have a right to rally and voice their opinion, peacefully. The protesters did not, because they did not get a permit and did not peacefully demonstrate. (Incidentally, I also disagree with Antifa and the other protesters that were there) We are a Country that goes by the Rule of Law. The protesters did not follow the rule of law, they tried to impose their own law on the rally. What people are too short sighted and emotional about is the fact that if the white nationalist rally had just been allowed to happen, quietly, with no press.. no one would know about it and that group would not be in a position to recruit more members. All publicity is good publicity.

As for the President taking some time to make a statement, I applaud him for taking time to sort through all the (mis)information from the press. I applaud him for making sure he understood who was involved and what actually happened. I would rather that than have him misrepresent himself and have to retract his statement because of new information that was not available IMMEDIATELY following the events. Other Presidents have done the same thing following a tragedy. We are such an on demand, impatient, give it to me now, instant gratification society. Also, that rally and ensuing violent protest did not pose a national threat, so the President was right to assess the situation before making his statement.