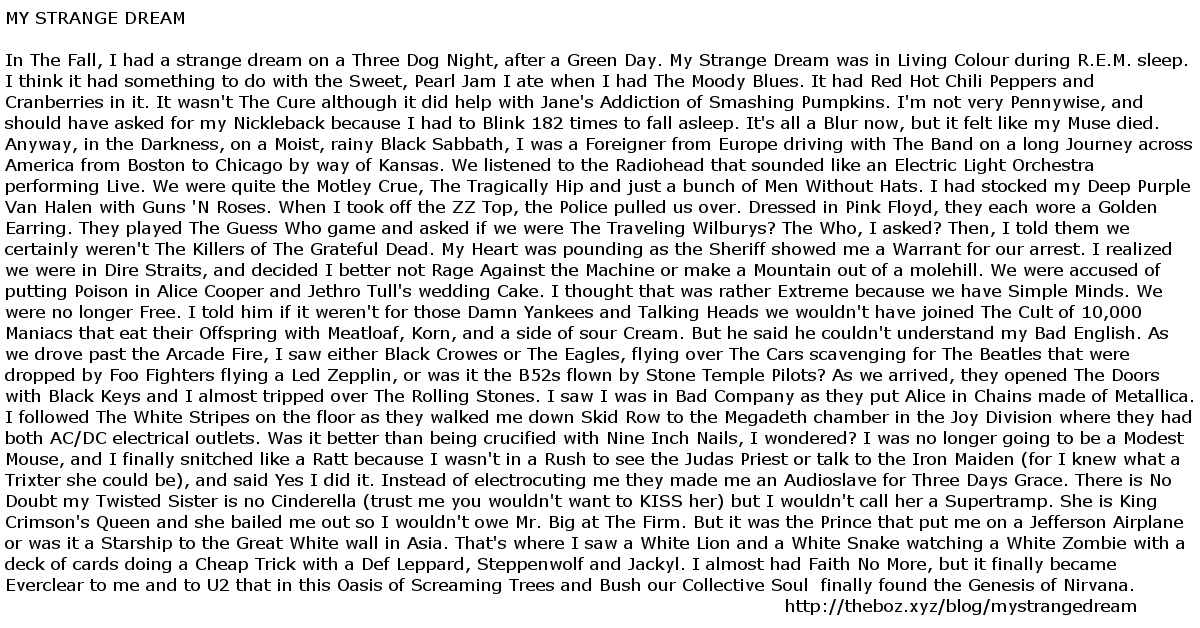 In The Fall, I had a strange dream on a Three Dog Night, after a Green Day. My Strange Dream was in Living Colour during R.E.M. sleep. I think it had something to do with the Sweet, Pearl Jam I ate when I had The Moody Blues. It had Red Hot Chili Peppers and Cranberries in it. It wasn’t The Cure although it did help with Jane’s Addiction of Smashing Pumpkins. I’m not very Pennywise, and should have asked for my Nickelback because I had to Blink 182 times to fall asleep. It’s all a Blur now, but it felt like my Muse died. Anyway, in The Darkness, on a Moist, rainy Black Sabbath, I was a Foreigner from Europe driving with The Band on a long Journey across America from Boston to Chicago by way of Kansas. We listened to the Radiohead that sounded like an Electric Light Orchestra performing Live. We were quite the Motley Crue, The Tragically Hip and just a bunch of Men Without Hats. I had stocked my Deep Purple Van Halen with Guns ‘N Roses. When I took off the ZZ Top, the Police pulled us over. Dressed in Pink Floyd, they each wore a Golden Earring. They played The Guess Who game and asked if we were The Traveling Wilburys? The Who, I asked? Then, I told them we certainly weren’t The Killers of The Grateful Dead. My Heart was pounding as the Sheriff showed me a Warrant for our arrest. I realized we were in Dire Straits, and decided I better not Rage Against the Machine or make a Mountain out of a molehill. We were accused of putting Poison in Alice Cooper and Jethro Tull‘s wedding Cake. I thought that was rather Extreme because we have Simple Minds. We were no longer Free. I told him if it weren’t for those Damn Yankees and Talking Heads we wouldn’t have joined The Cult of 10,000 Maniacs that eat their Offspring with Meatloaf, Korn, and a side of sour Cream. But he said he couldn’t understand my Bad English. As we drove past the Arcade Fire, I saw either Black Crowes or The Eagles, flying over The Cars scavenging for The Beatles that were dropped by Foo Fighters flying a Led Zepplin, or was it the B52s flown by Stone Temple Pilots? As we arrived, they opened The Doors with The Black Keys and I almost tripped over The Rolling Stones. I saw I was in Bad Company as they put Alice in Chains made of Metallica. I followed The White Stripes on the floor as they walked me down Skid Row to the Megadeth chamber in the Joy Division where they had both AC/DC electrical outlets. Was it better than being crucified with Nine Inch Nails, I wondered? I was no longer going to be a Modest Mouse, and I finally snitched like a Ratt because I wasn’t in a Rush to see the Judas Priest or talk to the Iron Maiden (for I knew what a Trixter she could be), and said Yes I did it. Instead of electrocuting me they made me an Audioslave for Three Days Grace. There is No Doubt my Twisted Sister is no Cinderella (trust me you wouldn’t want to KISS her) but I wouldn’t call her a Supertramp. She is King Crimson‘s Queen and she bailed me out so I wouldn’t owe Mr. Big at The Firm. But it was the Prince that put me on a Jefferson Airplane or was it a Starship to the Great White wall in Asia. That’s where I saw a White Lion and a White Snake watching a White Zombie with a deck of cards doing a Cheap Trick with a Def Leppard, Steppenwolf and Jackyl. I almost had Faith No More, but it finally became Everclear to me and to U2 that in this Oasis of Screaming Trees and Bush, our Collective Soul finally found the Genesis of Nirvana. 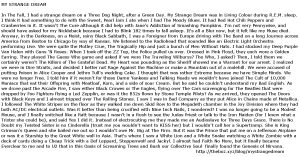