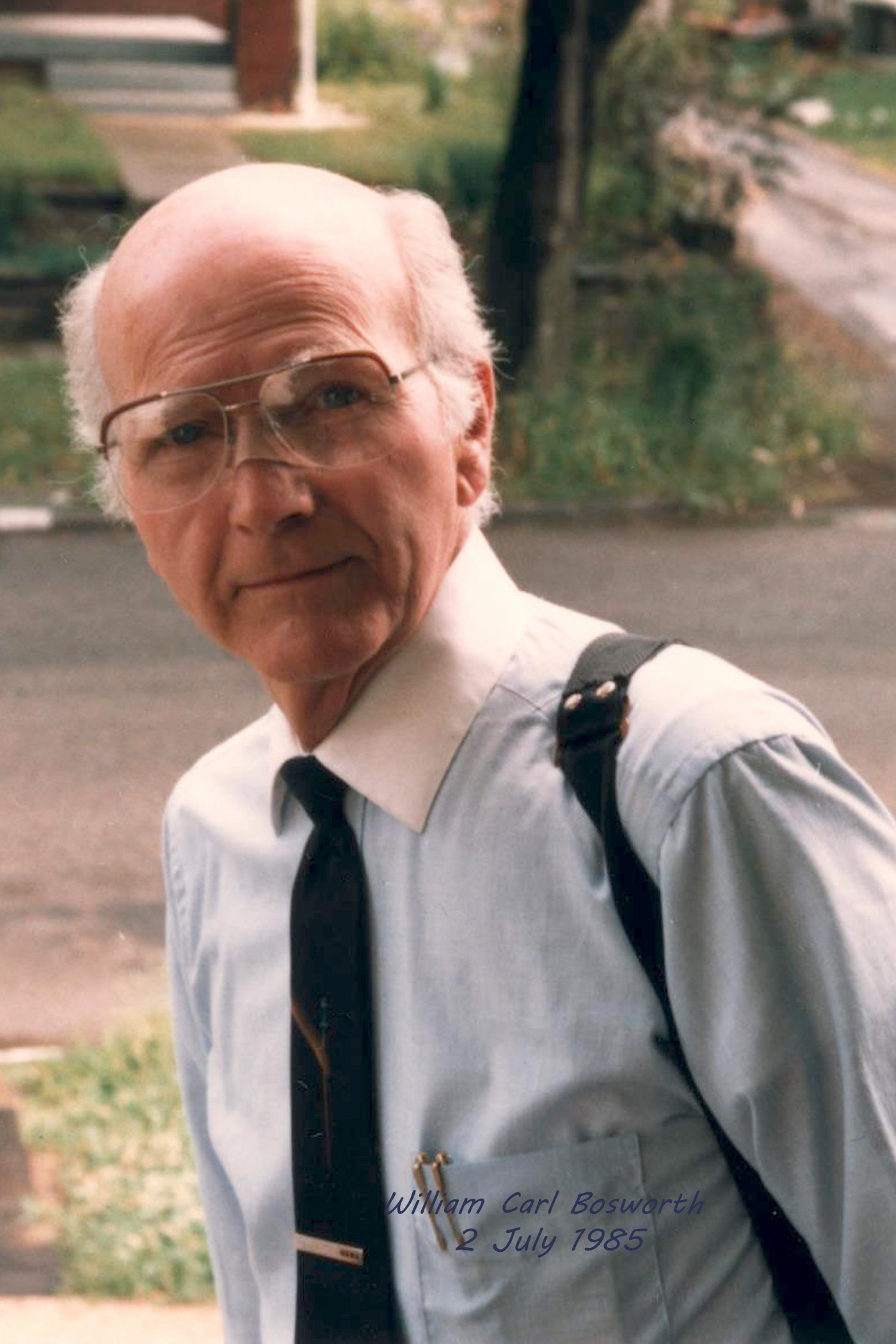 I have come to the conclusion that, for me, today is just another day. I do not need a day to be a father (or recognized as one). I am a father everyday. Hallmark can keep their cards. Home Depot can keep their tools. I do not need any gifts. Save your money or feed a homeless person instead. I am already blessed, and need no recognition of the obvious. Everyday is a celebration for me, as I watch my kids grow and become amazing people.

I grew up with a father who was there, but not really present in my life. It could be due to the fact that I arrived when he was 48 years old (he turned 49 a couple weeks later). I turn 48 this year and cannot imagine having a new born to care for, and raise for the next 18+/- years. It could be because he had a large angina on his heart. He was disabled from the time I was 2, and retired from work early. It could be that his other children were going through things and he was too stressed about it to spend time with me. It could be because my mom had a stroke the year before I was born, was paralyzed and had to go through a lot of rehabilitation. Regardless, my father was there in person but not really present.

When my parents married, they each already had children. We were like the Brady Bunch, but without the maid. My dad’s father passed away many years before I was born. My mom’s father passed away when I was 5. So I did not even have grandfathers to look up to and have as councilors and cheerleaders.

I was afraid of my dad as a child. He had an authoritarian attitude. “Do as I say, not as I do.” “Put your nose to the grindstone.” I heard those often. I was intimidated and afraid of doing something wrong, so I was a good kid, rarely getting into trouble. I didn’t like the threat of “the belt”. I couldn’t play loud because it could cause him undue stress. He wouldn’t play games with me. Watching TV, doing cross-words and strumming his guitar were his pass-times.

He didn’t let me climb trees because he was too afraid I would fall and break something. “We don’t have money to pay for broken bones” (something like that). I remember asking him to throw the ball with me when I was about 9 or 10. He got mad at me because I could not get it in his glove, and he had to pick up the ball more than not. We didn’t play anything together again after that, unless you count “Rummy”, a card game.

My mom was always the one that took me out to get a burger and fries. It was usually when she would go grocery shopping and I would go with her. She would often try to do things with me. But she was also limited by her stroke.

We lived in the Montreal area during my high school years. I remember my childhood friend coming to visit us one summer. My friend and I were probably 15 years old. My dad let him drive our car, but he didn’t let me.

My dad didn’t come to my high school graduation. He was off traveling the States, visiting his other children. He did that for a few months every year we lived in Canada. For all the grief and strife trying to get through those years one would think he would at least want to see me walk across the stage to receive my diploma, and congratulate me for finishing. But maybe since I didn’t finish at the top of my class, he wasn’t proud enough of me. I was not a good student, “He has so much potential if he would apply himself” is what so many teachers would say. I guess it was true. I still haven’t learned how to apply myself.

Several months before my dad died, he was away visiting his other children. I wrote him a letter expressing my uncertainty of the future. I felt like I needed my own car to help me move forward, to go places. He wrote back and gave me some fatherly advice that, to me as an 18 year old, was not really helpful. If you have followed me for any time, you have seen me share this letter before. 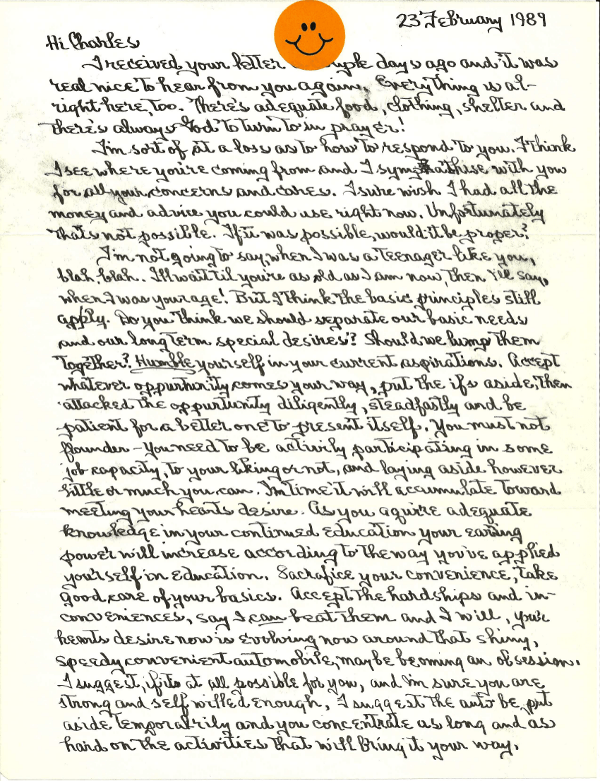 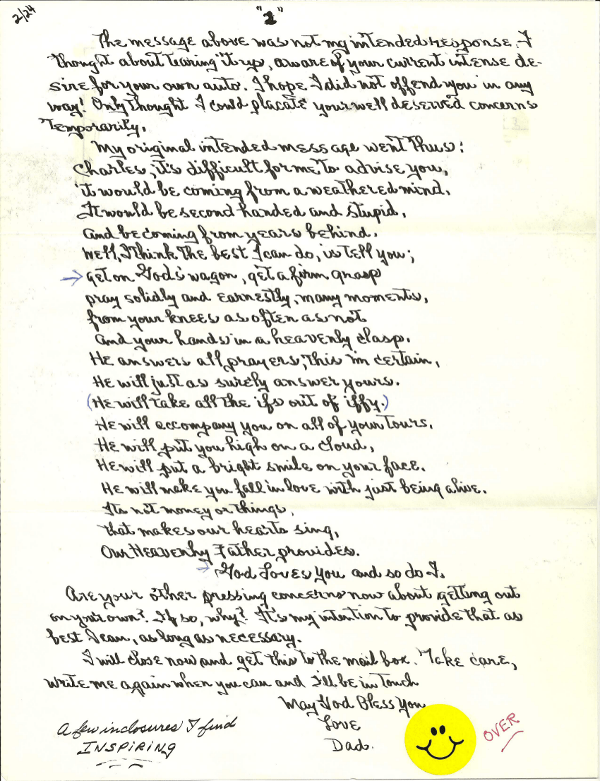 A couple months later, I joined the Marines. He returned home, to see me off I guess. He made plans with my mom to take her traveling with him this time. About 6 weeks before I was to head off to boot camp, he took me to Dairy Queen. I felt like I had finally done something worthy of his time. About a week or so later he had a heart attack that hospitalized him. He was on a ventilator and could not communicate. A week later, he died. I was there, in the room as his heart slowly stopped. It was a very difficult week, as my mom’s mother also had died.

I have come to realize that not only did I not have a father present in my childhood, I would not have one to consult as I became an adult. No one to ask about marriage, about raising children, about taxes or career advice. I didn’t graduate boot camp but I did get an honorable discharge. The issue was asthma related, but it is a story for another time.

I will fondly remember the one day I felt like I had a dad that was proud of me.

And for that reason, I strive every day for my children to know that I am proud of them. I strive every day to be a good father. I do not want to be recognized one day every year, I want to recognize them every day. That recognition is something I did not have.